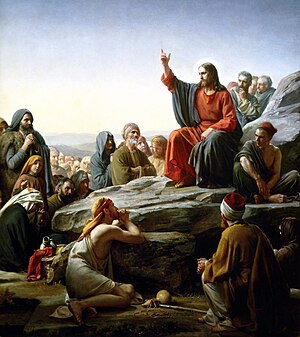 Every once in a while I get a little unconventional.   Today is Good Friday and I feel it is appropriate that I write about the leadership style of the greatest leader of all times.  During his leadership Jesus Christ created a climate where the mission and vision of his objectives were clearly defined and communicated.  He communicated in such a way that he did not have to seek followers, they wanted to follow him.

Jesus taught that you did not have to be a hero to be a leader. He taught just the opposite; that to be great leader you must be a servant. Jesus was willing to “walk the talk” when he demonstrated his commitment to this principle by washing his disciples feet.

Perhaps the most relevant example of what Jesus thought about Corporate leadership versus Servant leadership is found in the story where James and John’s mother came to Jesus and asked that her sons be permitted to sit at the right and left of Jesus in the Kingdom. Obviously, the mother of these two men had a very corporate view of the kingdom. She wanted her sons to be at high points on the executive ladder, Executive Vice-presidents of the Kingdom of God.

Jesus did not agree with this management style. He pointed to the Gentiles as a bad example of those who “lord it over” people, and wanted no part of this plan. Instead he pronounced and repeated on many occasions: “Whoever wants to be great among you must be your servant.”

The motto for his management style? “The Son of Man did not come to be served, but to serve, and to give his life as a ransom for many”.

All of this to say if leaders today follow the simple guidelines that Jesus practiced, great leadership would be seen throughout our world.

1. He expects that servant leaders be relational. We are to be among people, not over them.

2. The servant leader does not bark orders, but instead simply goes to work and demonstrates how others may join in.

3. The servant leader is a catalyst for behavioral change in the lives of those he or she leads.

It is not enough that followers obey commands, but that they experience a sense of community and purpose in the process.